Nigerian footballers play against Marine F.C. in Liverpool without boots and win 5-2. The commentator is hilarious
Posted by Unknown at 01:46 No comments:

1973 Federal Government Considers Changing The Name of Lagos to Eko. 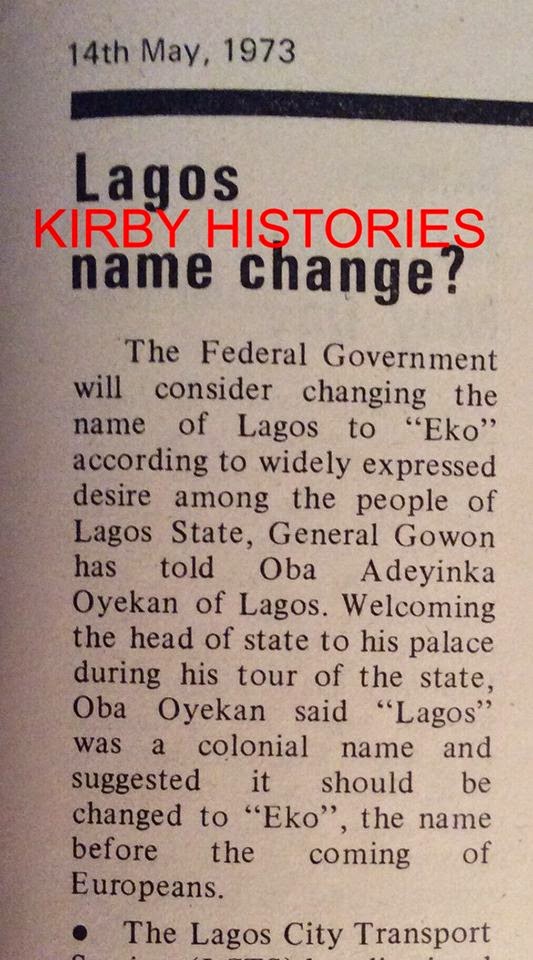 (West Africa Magazine)
Posted by Unknown at 17:21 No comments:

The Western Nigeria Television (WNTV) in Ibadan was Nigeria established in1959.  It was the first televison station in Africa

Here, we see Chief Anthony Enahoro (then Western Nigeria Minister of Home and Mid-West Affairs) discussing the establishment of this television service at a press conference and signing the agreement with Mr. Noel Sabine, representative of Overseas Rediffusion Limited, the technical partner of WNTV.

In 1977, from 15 January to 12 February, the Second World Festival of Black Arts and Culture known as FESTAC '77- took place in Lagos, Nigeria. 17,000 people attended and it had participants from over 50 countries. It was the largest cultural event ever held on the African continent.

The video is of the opening ceremony opened by the Nigerian Head of State Olusegun Obasanjo
Posted by Unknown at 12:51 No comments:

"FESTAC FOR BLACK PEOPLE": Oil Capitalism and the Spectacle of Culture in Nigeria. ANDREW APTER

In 1977, when OPEC came of age, an oil-rich Nigeria hosted Africa's second world Black Arts Festival (FESTAC '77) to celebrate the "individuality, the antiquity, and the power of the Black and African World."
Featured as a black world's fair, FESTAC produced an extravagant spectacle of ethnic diversity, Nigerian nationalism, Pan-African unity and utopian modernity which literally staged as "cultural tradition" in Nigeria's National theatre. Throughout this festival of cultural revival, from its planning stages in Lagos to the closing Durbar ceremony in Kaduna, a distinctive ideology of black culture and Africanity emerged which owed much to early ideas of Negritude and Pan-Africanism, but in key respects diverged from them. This divergence can be identified in specific events, such as the falling out between Lt-General Olusegun Obasanjo, Nigeria's Head of State and Grand Patron of FESTAC, and Senegal's President Leopold Senghor, who abdicated his position as FESTAC's co-patron and virtually boycotted the festival. It can also be understood in relation to Nigeria's distinctive federalism, which, recently traumatized by the Biafran War (1966-70), sought to stabilize the distribution of political power between competing ethnic blocs. But the underlying "secret' of FESTAC's cultural project, motivating its representations of culture and race, was the development of a state-regulated oil economy which revitalized the nation with unprecedented wealth.
This essay will examine how FESTAC '77 celebrated the marriage of "cultural tradition" with "fast capitalism" in Nigeria (Watts 1992), commodifying culture in the National Theatre through its forms of exhibition and display (cf. Karp and Lavine 1991). This investment of culture with commodity—value—a veritable fetishism of "fetishes"—masked a complex series of ethnic conflicts and class contradictions which intensified under oil-capitalism. For unlike the imperial world's fairs of Europe and North America, which deployed racial and cultural idioms to naturalize colonial hierarchies and essentialize alterity, race and culture functioned in FESTAC as commutable tropes of radical inclusion, seeking to neutralize the paradoxes of state wealth and power in a universalizing black nationalist ideology. And unlike socialist humanism of Senghor's earlier Negritude movement, celebrated in Dakar in the first Festac of 1966, FESTAC '77 signalled Nigeria's triumphant emergence as a significant player in global capitalism.
In fact, FESTAC celebrated a movement of articulation between Nigeria and the world economy which centralized the state to an unprecedented degree, overwhelming regional control of Marketing Boards initially established under British colonialism—cocoa in the west, palm oil in the East, groundnuts and cotton in the north (Helleiner 1966). These latter cash-crops dwindled in prestige and value compared with petro-dollars commanded by high grade oil, inflated by OPEC, and sold to the highest Western bidders. Nigeria had already reorganized its three regions into four (1963), then into twelve states (1967), and again into nineteen states by 1969.
A series of National Development Plans accelerated by oil-capitalism in the 1970s, however, lubricated the domestic economy in a state spending spree. A utopian vision of economic growth and modernization swept the nation as the government built new highways, doubled salaries in the famous Udoji Reform, and expanded the public sphere with new hospitals, schools and parastatal industries. Fast-capitalism indeed. Nigeria proudly proclaimed its role as the political and economic giant of black Africa, enshrined this message in its National Theatre, which served, in the words of FESTAC President Chief Anthony Enahoro (later dismissed for embezzling funds) as "the centre of Nigerian national life (Indigo, n.d.:16).

"The Spectacle is the other side of money: it is the general abstract equivalent of all commodities"
—Guy Debord.
The rationalization of tradition discussed thus far, linked the past to the future in programmatic statements which assimilated cultural difference with the authority of the petro-state through the logic of FESTAC's administration. Although Nigeria was wealthy, it had much to worry about, given the hated "ethnic balancing act" of keeping the federal republic together in relative concord. Within FESTAC's arena of secular ritual, the idea of cultural traditions was highly politicized. Nigeria's numerous minority cultures, such as Efik, Ibibio, Isoko and Tiv, competed with the politically more powerful Hausa, Yoruba and Ibo ethnic groups for both time and space in the National Theatre, where they performed abridged segments of their "traditional" festivals. As FESTAC became a multi-media stage for integrating Nigeria's diverse cultures within an overarching nation, it also became a contested site in which ethnic minorities competed for national representation and recognition. FESTAC's rationalization of tradition defused Nigerian ethnic politics by according different cultural phenomena equivalent value within a unified Nigeria and larger Black World. For this abstraction of identity from ethnic diversity became the formula for modernity itself. As in the capitalist marketplace, ethnic (rather than individual) identities were realized through the production and consumption of standardized exchange-values, except that here the surplus- value of Black Civilization accrued to the Nigerian state. It is perhaps no coincidence that the final and "highest" form of Knowledge in the colloquium's archive was Black Civilization and Mass Media, privileging a technology of power which reproduced ethnic identities as commensurable icons and simulacra for mass consumption.
This latter aspect of rationalization shades into a second hidden transformation whereby culture itself was commodified. FESTAC demonstrated that an oil-rich Nigeria placed a premium on cultural traditions, which it financed, "reproduced" on stage, marketed for tourists. A new class of culture-brokers emerged, selling the images, icons and ideas of "traditional" Africa to a broad range of national and international consumers. Indeed, FESTAC '77's trademark of a sixteenth century royal Benin mask became a familiar symbol of Nigerian grandeur spanning a wide range of spectrum of meanings: of African Kingship, of cultural genius, of European contact and Portuguese "trade" (primarily slaves), of British intransigence (the British Museum refused to return the mask), and above all, of commodity-value. No other image was so mass-produced and commodified, both in souvenir replicas and on fliers and broadsheets which sold the idea of Festac under the sign of African Sovereignty (plate 5). This iconic association of African culture with commodity-value was in fact allegorized by the Festac Flag. As explained in a promotional book published by the International Festival Committee:

"The history which creates the relative autonomy of culture and the ideological illusions of this autonomy also expresses itself as history of culture"
—Guy Debord
Nowhere was the spectacular conversion of colonial genealogies (of "race" and "tribe," capitalism and empire) into postcolonial identity more striking than in FESTAC's closing Durbar ceremony. Held in Kaduna, the Durbar extended FESTAC out of Lagos into the Islamic emirates of Northern Nigeria, remapping the festival onto the country's vast political geography to celebrate Islamic jihad and theocratic rule. Amid the "4,000 horses, 500 camels and 2,000 grooms, footmen and ratist," who took part in the Durbar, General Obasanjo praised the Northern emirates for their precolonial statecraft and the challenge they had posed to the architects of British overrule:

I believe this is one of the few countries in which colonialists have found it necessary to leave traditional power structures more or less intact. This system met by the British had its own rules, its laws and its bureaucracy. The British no doubt found the emirate system so effective that they had no choice but to adapt it to suit imperial objectives (West Africa, 14 Feb., 1977:311).

No doubt indeed, for the emirate system provided the very model for Indirect Rule which Lugard championed on formerly "acephelous" societies through the creation of warrant chiefs. Whereas Lord Lugard was attracted to the Hausa-Fulani emirates precisely because of their aristocratic ideology, administrative machinery, and "sultanistic" control, for Obasanjo they became precolonial templates of indigenous "democracy" and interethnic unity—themes of FESTAC that were ritually consecrated by the Durbar ceremony itself. He proclaimed:

The durbar is a device whereby the emir can judge the popularity of his rule as well as an indication of loyalty of those governed to his rule. By that simple control-device and despite ethnic diversity of the territory, a collection of people are able truly to present their basic unity. In witnessing the durbar and savoring its splendid spectacle we are symbolically paying our respects to a civilization that existed here in this country, as well as in many other parts of Africa, at various times in our continental history before the advent of imperialists from Europe (ibid).

(Reproduced in full from http://quod.lib.umich.edu)
Posted by Unknown at 12:40 No comments: